In the sub-basin of the Macara River, basin of Catamayo-Chira, the Water Without Borders project was born to develop the binational management of the transboundary basin between the provinces of Loja (Ecuador) and Piura (Peru), with the support of France and Italy. The European Commission approved the project and financed it with the Waterclima LAC funds, which aim to combat the consequences of climate change in socially vulnerable areas in Latin America.

The project took place over 3 years. It aimed to promote binational environmental governance, with exchanges of good practices for the recovery of traditional ancestral knowledge in agriculture.

In order to improve agricultural production and combat the effects of climate change in Loja province and Piura district, the project consisted of building on this traditional knowledge, in combination with modern and agro-ecological practices. The goal was to have permanent water to irrigate farms in indigenous communities. The work focused on the construction of "albarradas", which are ancestral techniques developed by pre-Inca civilizations to store water outside the rainy season. These tanks are constructed with an impermeable layer to prevent water from infiltrating and being lost. The construction of these irrigation reservoirs and the use of sprinkler and drip irrigation systems have proven to be essential for the preservation of the water resource. In addition, the reforestation carried out has made it possible to limit the erosion caused by increasingly heavy and recurrent rains in the catchment areas. With the establishment of such agroforestry systems, food security has improved rapidly. To ensure the sustainability of these actions, an environmental awareness campaign has been set up in the villages through education. 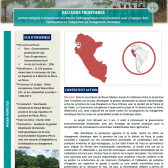 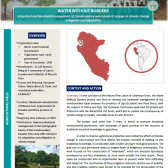 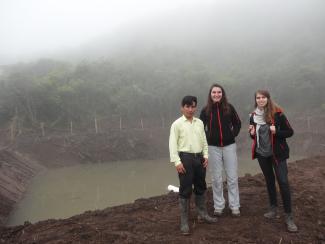