A true scourge of rivers and native to South America, water hyacinth is an aquatic plant that proliferates at high speed and covers the surface of the water with a thick layer of plant biomass. While it initially purifies the watercourses in which it grows, it eventually asphyxiates them when it reaches maturity, leading to eutrophication. Native species of animals and plants are strongly impacted, as are fish that do not tolerate high levels of nutrients. Human activities are also hindered, as boats can no longer pass through and water can no longer be pumped for irrigation. The health impact is equally worrying, as this green carpet shelters many nests for mosquitoes, proliferating and spreading malaria.

This invasive alien species mainly affects the Niger River, but has also spread throughout the Sub-African continent and affects many other regions including the dams of Burkina Faso and Lake Victoria.

Mariama Mamane, a 29-year-old Nigerian woman and former student in water and sanitation engineering, was looking for answers on the silting and pollution of the Niger River. Since 2013, she set up a project combining agriculture, sanitation and energy. Rather than simply trying to destroy this plant, she finds a use for it by using it for phyto-purification of watercourses and transforming it into natural fertilizer by anaerobic composting. Phyto-purification is a sanitation system that uses bacteria from the roots to purify water. It also finds a profit by using the biogas released to produce electricity. Since 2016, Mariama has received several awards for her innovative project. 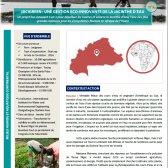 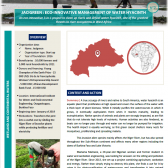 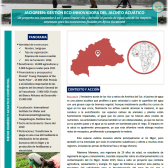