Born in 1934 in Uzbekistan, then a Soviet republic, and a civil engineer who graduated from the Ukrainian Water Institute in 1956, Professor Dukhovny worked mainly in Central Asia. He was Chief Engineer in charge of the development through irrigation of the Hunger Steppe (350,000 ha of new irrigated land in eastern Uzbekistan), Director of the Karakum Canal Construction Unit, Chief Engineer and First Deputy Chairman of the Central Asian Council for Irrigation and New Land Development.

From 1973 to 1993, he was Director of the Central Asian Irrigation Research Institute (SANIIRI). 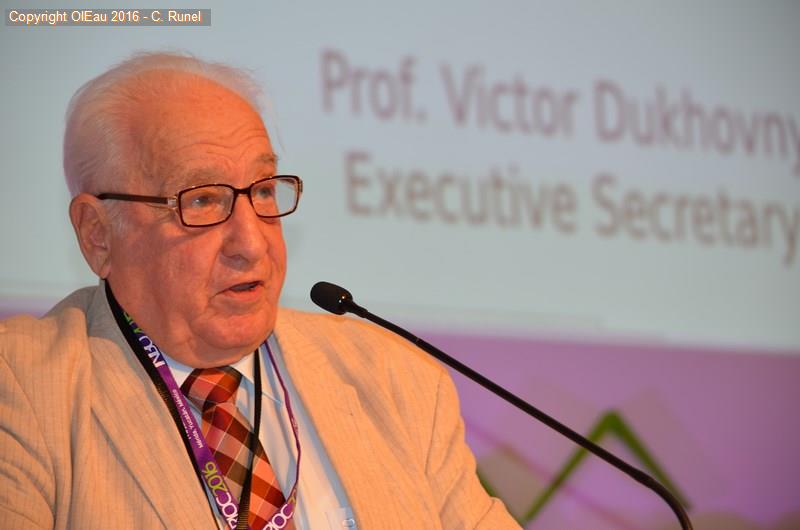 His work as an advisor and manager of a large number of regional projects led to the implementation of advanced water resources management methods and the establishment of the ICWC training centre.
Since 1996, Professor Dukhovny has been Director of the ICWC's Scientific-Information Center (SIC).

In addition to his work in Central Asia, Professor Dukhovny has also worked as a consultant in India, Nicaragua, Syria, Yemen and other countries.

In 2003, he was awarded the title of Academician of the Russian Academy of Water Sciences.

He was a long-time partner of INBO, and for Eric Tardieu, INBO Secretary General, "Viktor's personality and work will be remembered, since his input to the cause of water resources management in Central Asia has been a major one, and his experiences have been disseminated and valued in many other regions. Viktor's support to INBO activities, in particular, has been constant and vital in your region, and INBO network will faithfully keep the memory of his oustanding contributions for the past decades.".