Programme for the rehabilitation and conversion of 1,000 water points with hybrid pumps and management systems

Programme for the rehabilitation and conversion of 1,000 water points with hybrid pumps and management systems

The programme will be implemented in 4 regions. Their identification is ongoing

In 1998, The Ivory Coast adopted a Water Code (Law No. 98-755 of 23 December 1998), which defines the country's legal framework for the integrated management of water resources and the management of hydraulic works.

The political crisis that lasted from 2000 to 2011 strongly affected access to water services. Under-investment during the crisis and high population growth led to severe water production deficits throughout the country. Large investment programmes in Abidjan have closed the gap, but deficits remain significant in many secondary centres as well as in rural areas and could be exacerbated by the observed disruption of the seasonal rainfall pattern.

The Priority Action Plan for the 2011-2016 period has led to a significant improvement in the national rate of access to water, which has risen from 40% in 2011 to 70% today, with a significant disparity between urban and rural areas. Nevertheless, Ivory Coast has made access to drinking water one of its priorities, as set out in the 2016-2020 National Development Plan (NDP), and has set itself the goal of achieving a coverage rate of 95% by 2020, and 100% by 2030 in accordance with the Sustainable Development Goals (SDGs). 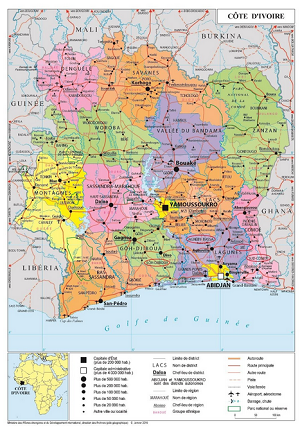 A three-year strategic plan (Pst) has been drawn up by the Office National de l'Eau Potable (ONEP) in order to achieve these objectives, while strengthening the human, technical, legal and financial capacities of the actors in the drinking water sector.

In rural areas, drinking water supply infrastructure is still dominated by Human Powered Pumps (HPP) which equip 21,000 water points with a fairly high failure rate (around 40%). The Ivorian government intends to take advantage of the need to renovate the stock of HMPs to reduce the drudgery of fetching water and to promote technological innovations in the human hydraulic sector. In addition to these objectives, the State aims to put in place infrastructure maintenance mechanisms to ensure continuity of service and to keep breakdown rates as low as possible.
The major challenge for the water sub-sector lies in finding a management and maintenance solution that is close to the population and that integrates regional supervision.

This programme to rehabilitate and modernise 1,000 existing water points, for localities of 500 to 2,000 inhabitants, aims to secure the population's water supply by improving the quality of the service and to make its management sustainable by setting up a payment system linked to the quantities of water consumed in order to at least cover the operating costs.

A total of 500,000 people will thus benefit from modernised access to water.

The fact that the service will be paid for in proportion to the quantities of water consumed will inevitably raise the requirements in terms of quality of service (continuous service of guaranteed quality water) provided by the Ministry of Hydraulics and ONEP. In order to meet these obligations, the latter may choose to delegate these responsibilities to a private operator through a balanced Public Service Delegation (PSD) contract that is binding on the population..

Target 1.4: Access to resources
By 2030, ensure that all women and men, particularly the poor and vulnerable, have equal rights to economic resources and access to basic services, property and control of land and other property, inheritance and natural resources, and to appropriate new technologies and financial services, including microfinance.

The main expected results are as follows:

Management of the 1,000 systems by one or more private operators over several years (about 10 years) via a Public Service Delegation