CONTEXT AND ISSUES OF THE TERRITORY :

The city of Durban, a member of the C40, aims to become the most liveable city in Africa by 2030.
Energy efficiency strategies (Climate Change Strategy) have been put in place.

Their objectives focus on the development of the energy sector and the increased use of renewable energy sources and efficient practices. 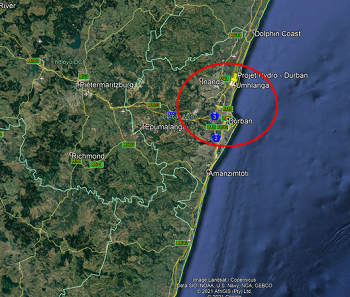 Projects have already been launched, including energy optimisation projects to reduce the consumption of energy-intensive areas such as lighting and heating.
Other key sectors are also being studied.

In this context, ALTERELEC, an independent producer of renewable energies based in Reunion Island, is proposing an innovative and compact micro-hydropower turbine project designed to equip raw or drinking water pipe networks, and is capable of converting the available water pressure into electrical energy. The municipality will have a technology that allows it to produce electrical energy to empower its equipment and infrastructures consumption.

his project therefore offers an interesting, renewable and reliable energy and electricity production solution. An inventory of the potential for hydropower production in this form has been realized, and more than 47 sites have been identified, within the territory of the eThekwini municipality. These resources are currently unexploited and meet the objectives of their action plan to cover 25% of the local government and public sector electricity supply with renewable energy and thus participate in improving the energy efficiency of the City of Durban's Water and Sanitation Department.

Directorate General of Treasury / Ministry of the Economy, Finance and Recovery

ESTIMATED COST OF THE PROJECT:

500 000 € /  including development of the hydropower concept