Hydrometeorology in Tunisia: The Medjerda Basin

Hydrometeorology in Tunisia: The Medjerda Basin

VERBATIM OF THE PROJECT LEADER:

The Ministry of Agriculture, Water Resources and Fisheries is a stakeholder in the project, and is the beneficiary of a donation from the French Treasury Department concerning The Ministry of Agriculture, Water Resources and Fisheries, beneficiary of the donation from the French Treasury concerning the radar, which implements all the infrastructure to deploy the radar near Djendouba, and organises the operation of the whole system.  The National Météorologique is involved in the technical expertise associated with the project and in the exploitation of the data. Other actors are interested, such as the Tunisian Internet Agency Tunisian Internet Agency, and the National School of Engineers of Tunis. »

The project is located in the Medjerda catchment area in the northwest of Tunisia. The meteorological radar, the main object of the project, will be installed on the top of a hill on the roof of a water and forestry vigilance post, 20km south of the town of Jendouba. This geographical situation offers the possibility of a very good coverage of the region.

Figure 1: Photo of the radar site with the instrument platform on top of the building (left). Simulated hydrological coverage of the radar (right).

Whether it is a question of water resource management or crisis management in the event of an extreme rainfall event, rainfall information is the essential data.
Today, Tunisia has a fairly dense network of climatic rain gauges (readings taken every 24 hours) but very few high-resolution rain gauges (5 minutes) with retransmission of rainfall data. resolution (5 minutes) with real time transmission of observations, suitable for real time management of hydraulic works in case of floods. Furthermore, Tunisia has no meteorological radar, therefore no means of monitoring rainfall events in real time, nor of "immediate forecasting" (i.e. 1-3 hours ahead). (i.e. 1-3 hours ahead). 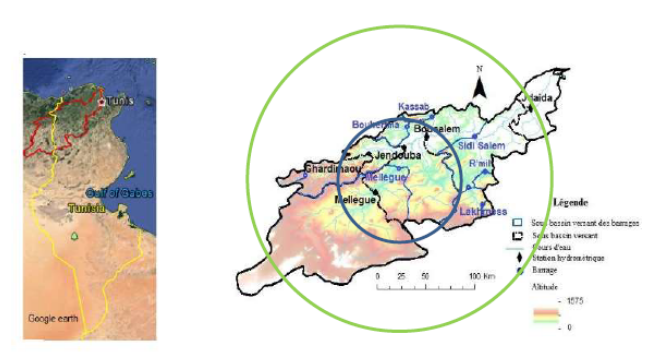 Figure 2: The Medjerda catchment area with its hydraulic works and equipment: Dams (blue circles) and hydrometric stations (black diamonds). The installation of the HYDRIX radar is envisaged near Jendouba. The blue circle (60 km in diameter) delimits the region where the radar will take very precise measurements of rainfall. The green circle indicates the range to which it operates for effective monitoring of rainfall systems.

Tunisia is a country under great water stress, with groundwater and surface water already 90% mobilised. Moreover, as everywhere in the world, the increase in population and the correlative growing urbanisation are leading to an increase in water demand, soil sealing and a particular vulnerability of certain urban districts, those where runoff is concentrated. Finally, with climate change, Tunisia risks seeing its water resources diminish and its rainfall concentrated on extreme rainfall events. This will not simplify the overall management of water resources, not to mention the amplification of the hydrological risk in urban areas, associated with runoff and flash floods.

Figure 3: Average annual rainfall in Tunisia. It can be seen that the North East is well irrigated (up to 1250 mm/year) while the region of Tunis and Cap Bon receive between 500 and 750 mm/year. The south of Tunisia (Sfax and lower latitudes) has a semi-arid climate.

The NOVIMET solution, which combines an X-band weather radar (HYDRIX radar), the ZPHI® rainfall extraction software and the RAINPOL® service platform, meets the needs of both crisis management in the event of extreme rainfall events and water resource management.

1- For extreme rainfall events in rural areas, NOVIMET offers 24/7 crisis management assistance based on
a. one hand, on an innovative weather radar technology allowing very precise and high spatial resolution measurements (0.5 to 1km) of hydrometeors (rain, snow, hail), within a radius of 60 km around the radar,
b. and on the other hand, on an Internet service platform geolocating precipitation, determining its two-hour forecast, and able to hydrological models directly assimilating the observed and forecasted rainfall on the catchment areas of interest, in order to determine with a 1 to 2-hour notice of the flow at the outlet,
For the dam manager, the added value of the NOVIMET solution is to be able to anticipate the reactions of the different sub-basins, in order to manage the crisis as well as possible.

2- In Tunisia, 80% of the water resource is used for irrigated crops. The country has developed an appropriate infrastructure: the dams and canal systems mentioned above, the development of irrigated areas, the development of optimised irrigation techniques.
Irrigation is reasoned according to rainfall, irrigation needs and the environmental concern of allowing groundwater recharge.
a. For the water resource manager, rainfall information within the irrigated perimeters allows (along with other meteorological information such as sunshine etc.) to information such as sunshine etc.) to anticipate demand.
b. For the farmer, precise rainfall information on a scale (typically 25ha) close to his plot, will allow him to reason his water consumption for his crops and to water consumption for his crops and thus reduce his water bill.
Such practices, on the scale of an irrigated agricultural production basin, are likely to optimise the use of water resources.

3- It is also civil protection that the NOVIMET solution can assist in the event of extreme rainfall and catastrophic flooding. The Governorate of Jendouba has more than 400,000 inhabitants. As shown in Figure 4, it is subject to this type of event [a rainfall of 90 mm in 24 hours every ten years].The same applies to the north-eastern coast from Tunis to Sfax. To cope with an extreme rainfall event, one can use the model deployed by NOVIMET in France in the Alpes Maritimes. The RAINPOL platform provides rainfall maps to the civil protection of each locality, sends them to of each locality, sending targeted alerts each time an intense rain cell is about to cross an area or a neighbourhood vulnerable to flooding. The civil protection then applies the emergency plan foreseen in the circumstances. It is also possible to consider issuing warnings to individuals (e.g. motorists for individuals (e.g. motorists to avoid being caught in flooded roads).

Figure 4: Map of decadal daily rainfall in northern Tunisia. The areas in blue, dark blue and mauve areas correspond to daily rainfall of more than 90 mm.

SDG TARGETED BY THE PROJECT:

Referring to the UN Sustainable Development Goals, the following objectives can be noted:
On the one hand:

And on the other hand:
SDG 11.a Promote positive economic, social and environmental linkages between urban, peri-urban and rural areas by strengthening
development planning at national and regional levels.
SDG 6.4 By 2030, significantly increase the efficient use of water resources in all sectors and ensure the sustainability of freshwater withdrawals and supplies in order to supply water and to address water scarcity and significantly reduce the number of people suffering from water scarcity.
The sharing of the water resource between irrigated agriculture (80% of the resource) and drinking water (14%) in a country subject to water stress such as Tunisia requires optimal management of the resource, which is the objective of MARHP and its Tunisian partners through this HBMT programme. The aim is to

The beneficiary of the project is the Ministry of Agriculture, Water Resources and Fisheries (MARHP), and more specifically in this Ministry, the Planning and Hydraulic Balance Office (BPEH), the General Directorate of Water Resources, and the General Directorate of Dams and the large hydraulics works.
The MARHP has set up a strategy to connect the dams with the aim of controlling the water transport network and regulating its distribution
to the different areas. In this perspective, the Sejnane dam was connected to the Medjerda canal, the Sidi Barak dam to the Sejnane dam and the Barbara dam to the Sidi Salem dam.

This connection is intended to develop the 4.1 billion cubic metres of water mobilised through some 21 large dams, 203 hill dams, 580 hill lakes, 2,400 deep wells, 3 desalination plants, 4,000 structures for the spreading of run-off water and the supply of groundwater. 1,140 exploration wells, 1,300 control wells and 1,100 deep wells.
The MARHP is also responsible for:

Today, the Ministry of Agriculture manages the problems of water resources, flood forecasting and flood warning with only a network of 130 climatic rain gauges (read every 24 hours only). There is no weather radar in Tunisia. The INM has planned to equip itself with a network of three C-band radars, but is facing a funding problem. C-band radar is three to four times more expensive than X-band radar, with only slightly greater hydrological range.

HYDRIX data processed by ZPHI® provides a better estimate of rainfall on the ground than a rain gauge, with the advantage of providing a continuous observation in a geographical area of 60 to 70 km around the radar, at a rate of one rain gauge per km2. A HYDRIX® radar associated with ZPHI® is thus the equivalent of a dense network of 11,000 to 15,000 rain gauges. With the advantage over the network of rain gauges that it is able to anticipate the arrival of the rainy system with 2 hours advance, including from the sea.

The project will provide public actors in water resource management with innovative tools to help improve performance and practices:

The implementation of the radar, its data provision platform and the expert system triggering alerts to users, will have a virtuous effect:
it triggers a change in the behaviour of the authorities and users who will, by using the information, adopt new practices, e.g:

Duplication of the solution on various other sites in Tunisia subject to hydrological hazard such as the regions of Nabeul,
Monastir, and Cap Bon (see Figure 4)